With the Kangaroos having played just four Tests since the 2017 World Cup final and their last outing being a shock loss to Tonga three years ago, due to COVID, the squad announced on Monday represents a changing of the guard.

The combined Test appearances of the 24-man squad for Australia totals just 64, with just 11 players having previously worn the green-and-gold jersey.

Even Tedesco has only forced his way into the Kangaroos side since the 6-0 triumph against England at Suncorp Stadium after playing the previous two World Cups for Italy. 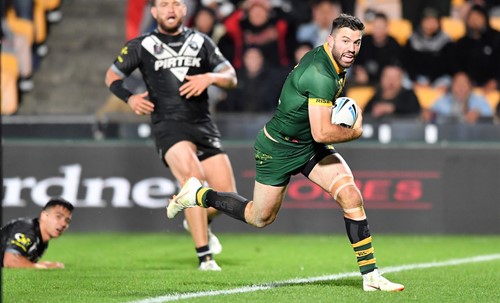 Yeo, who has led the Panthers to back-to-back premierships, and Rabbitohs captain Cameron Murray will be Tedesco’s deputies in an indication of how fierce the battle between Daly Cherry-Evans and Nathan Cleary will be for the No.7 jersey.

Cherry-Evans had been Australia’s vice-captain in 2018 and 2019, with former Sydney Roosters second-rower Boyd Corner taking over the captaincy from Cameron Smith after the last World Cup.

Tedesco has since succeeded Cordner as Sydney Roosters and NSW captain, and Meninga said he was an obvious choice to lead the Kangaroos to England.

“It was pretty straight forward,” Meninga said. “He is the premier player, he got the player’s player last night as well. I thought he was an outstanding candidate. He also captains his club and captains his state.”

A humble Tedesco described the appointment as the greatest honour in the game and said he had been emotional when Meninga told him he would be captaining Australia to the World Cup.

“I told my friends and family and they were emotional about it so I am really excited about going over there and leading the boys to a World Cup,” Tedesco said.

“I don’t think there is a higher honour in the game and when Mal gave me the call, I was pretty speechless and proud of myself.

“I know it is a big task, but I am looking forward to it. I think running out as captain with the Australian jersey on is going to be a very proud moment.” 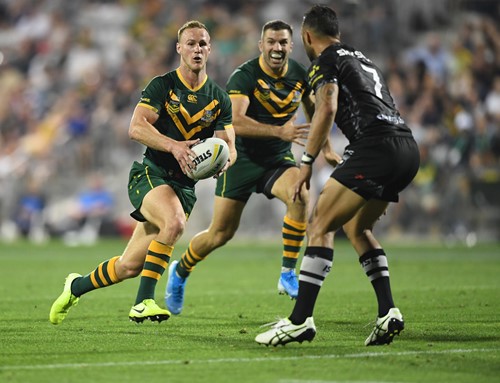 Tedesco’s standing as the game’s No.1 player also meant that there was no room for Penrith fullback Dylan Edwards, who won the Clive Churchill Medal as player of the match in Sunday’s night’s 28-12 grand final defeat of Parramatta.

Meninga said Latrell Mitchell or Cameron Munster could play fullback if Tedesco was unavailable, with Cherry-Evans spending time at five-eighth for the Prime Minister’s XIII last week in a possible indication of Meninga’s plan for such a scenario.

With just two hookers, Ben Hunt and Harry Grant, Cowboys forward Reuben Cotter is considered the back up dummy half as Meninga and his selectors, Darren Lockyer and Laurie Daley, did not feel they could also take Damien Cook.

“There are 21 of the 24 players who played Origin this year, and I think Ben is an outstanding hooker,” Meninga said of Hunt, who plays halfback for the Dragons but hooker for Queensland.

“We have got Reuben Cotter who is a back-up hooker as well. He came to the Cowboys as a No.9. His form this year has been extraordinary, and he can play anywhere in the forward pack.”

Cotter, Cowboys team-mates Jeremiah Nanai and Murray Taulagi are among the 13 Test newcomers, which include Yeo, Cleary and Liam Martin from the premiership winning Panthers side.

With Tedesco, Josh Addo-Carr, Mitchell, Jack Wighton, Munster, Cherry-Evans, Trbojevic and Murray the only remaining players from the 2019 Tests against New Zealand and Tonga, Meninga said he would place a strong emphasis on establishing team culture in England.

“It is something that we will have a conversation about right from the beginning, around how important the green and gold jersey of the Kangaroos is and the success we have had over a long period of time,” he said.

“We have a strong value system that Teddy has been a part of as well which we will discuss because I think a foundation of our success is around how much we respect and honour the jersey.”

The Kangaroos face Fiji in their opening match of the World Cup on October 15 at Headingley.