New Zealand’s Joey Manu and Raecene McGregor, and England’s Sebastien Bechara, are the 2022 IRL Golden Boot winners as the Men’s, Women’s and Wheelchair international player of the year.

Manu, McGregor and Bechara received the Golden Boot awards in Manchester on Tuesday after a comprehensive judging process involving former Test greats, rugby league pioneers and members of the media.

Golden Cap recipient Adrian Morley, who is one of just nine players to have played 50 or more Tests, presented the Men’s Golden Boot to Manu – the sixth Kiwi to win the award since its inception in 1984. 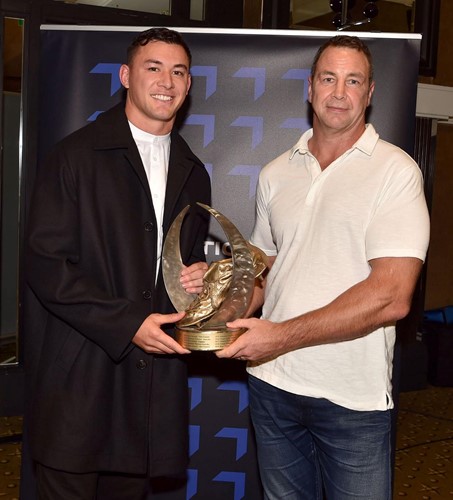 McGregor is the first New Zealander to be awarded the Women’s Golden Boot, which was introduced in 2018 and won by Jillaroos centre Isabelle Kelly, who passed the honour to team-mate Jessica Sergis the following year.

The Wheelchair Golden Boot was introduced in 2019, with Bechara’s England team-mate Jack Brown being the inaugural winner but due to COVID the award has not been presented for the past two years.

Manu has been a revelation at fullback for the Kiwis – a position he doesn’t usually play for the Sydney Roosters – and was a stand-out in the mid-season Test against Tonga, as well as each of New Zealand’s World Cup matches.

Significantly, McGregor and Bechara also played mid-season Tests and their performances helped them to edge out Golden Boot rivals.

Introducing the winners of the 2022 International Rugby League Golden Boot:

“In the past it has been won by some of the greatest players to have played the game, such as Wally Lewis, Mal Meninga, Ellery Hanley, Andy Farrell, Peter Sterling, Andrew Johns, Benji Marshall, Stacey Jones, Darren Lockyer, Johnathon Thurston and Cameron Smith.

“Now Joey, Raecene and Sebastien join them after each producing a series of outstanding performances for their nations, from the mid-season internationals to the World Cup.

“On behalf of the IRL, I would like to congratulate Joey, Raecene and Sebastien, as well as the players who were selected on the short lists for the Men’s, Women’s and Wheelchair Golden Boot awards.

“In each case, the stand-out performances of the winner in the mid-season Test gave them an edge over other contenders coming into the World Cup, which may have helped to decide the awards.

“I would also like to thank all who helped participate in the judging process, including giants of the international game, Cameron Smith, Honey Hireme-Smiler, James Graham, Karen Murphy and Ruben Wiki.”

Smith (Australia), Graham (England and Great Britain) and Wiki (New Zealand), who are Golden Cap recipients, helped selected Manu as the Men’s Golden Boot winner after a panel of journalists and commentators chose a short list of candidates.

Manu ran a world record 401 metres with the ball in New Zealand’s mid-season Test against Tonga and has ran more than 300 metres in each of his five World Cup appearances.

The Women’s Golden Boot was chosen by a panel, which included Jillaroos and Kiwi Ferns greats Murphy and Hireme-Smiler, commentator and former England star Danika Priim, refereeing pioneer Julia Lee, and members of the media.

McGregor’s award caps a stunning year for the Kiwi Ferns halfback, who was uncontracted for the postponed 2021 NRLW season until winning player-of-the match for the Māori All Stars. 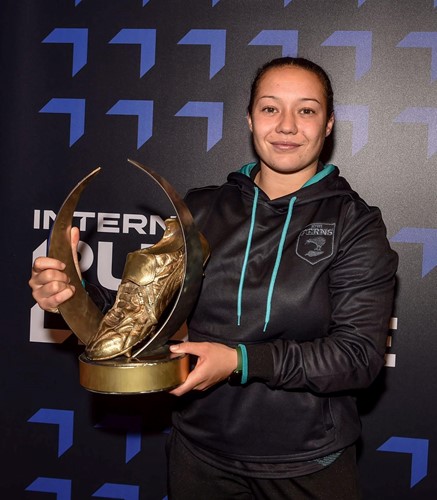 Raecene McGregor with the international player of the year award.

After helping Sydney Roosters to the NRLW Premiership early in the year, she was awarded the Dally M Medal as the best player of the 2022 NRLW season.

Kiwi Ferns Head Coach Ricky Henry commented, “Rae is a special player, she’s one of those rare players; it’s been a fantastic year for her.

“She’s grown in this space not only as a leader but as a playmaker, she’s quality and the best in her position.

“Having her in our campaign has given us a lot of confidence not only with her ability to game manage but how she makes the players around her look good too.

“To be awarded Golden Boot is a massive achievement considering the amount of high-profile players that have been around the game for a long time.”

The Women’s Golden Boot award was presented to McGregor, who was accompanied by sister and Test team-mate Page, by long serving RFL executive and RLWC2021 director Karen Moorhouse. 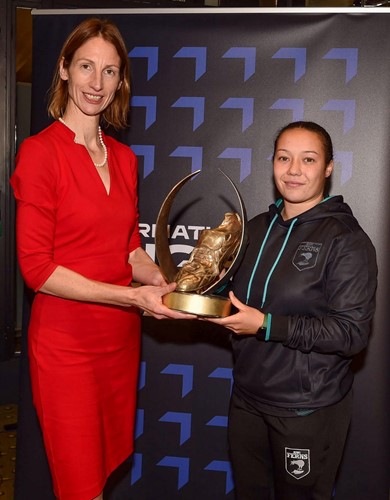 Bechara has also been consistently one of the best players every time he has played, starring in England’s mid-season Test win over France, who they will again meet in the World Cup final at Manchester Central on Friday night.

He edged England team-mate Jack Brown, who is based in Australia and did not play the mid-season Test, and France’s Jérémy Bourson.

The IRL Wheelchair Golden Boot was presented by Wheelchair Rugby League pioneer, Malcolm Kielty, MBE, who was on a panel of officials, coaches, referees and members of the media to choose the award.

“Out of the six Test matches the Kiwis have played, Joey has been MVP of half of those (v Tonga, Lebanon and Fiji) and has been one of our best throughout the World Cup.

"Raecene was only recently crowned Dally M Player of the Year and to add the best player in the international game to her calibre of awards is outstanding.

“Players like Joey and Raecene inspire generations of young Kiwis and Kiwi Ferns coming through at every level. They wear the jersey with pride and play an integral role in our game.

“I can’t think of any two more deserving, this is a great day to be a Kiwi and they have both done their countries proud.”