Lawrence and Golding headline a 24-man squad announced by Jamaica coach Romeo Monteith, who oversaw the rise of the Reggae Warriors to World Cup qualification within a decade their first Test.

The Super League pair are among 14 members of the squad that qualified for the tournament by winning the 2018 Americas Championship, and bring invaluable experience to the Jamaica team.

Lawrence has played more than 300 matches in the forwards for Huddersfield and previously represented England Knights, while Golding has made more than 100 Super League appearances and can play in the halves or at fullback. 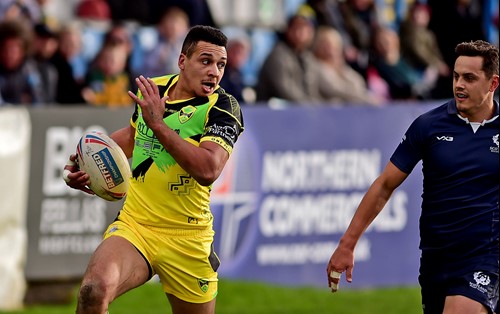 Jamaica head coach, Romeo Monteith, said: “We are excited to mix it with the best players in the world and everyone is ready to give their all. We encourage everyone to get behind this team and join us on what should be a terrific as well as historic journey. We first made our international debut in 2009, and to have qualified for a World Cup less than 10 years later speaks to our commitment and tenacity. We are in a very tough group, but our aim is to give a good account of ourselves. The World Cup is the pinnacle of the game, and we hope this will be the first of many appearances.”

The Reggae Warriors are drawn in Group C and will face Ireland at Headingley, Leeds on October 16, New Zealand at the MKM Stadium, Hull on October 22 and Lebanon at Leigh Sports Village on October 30.

The top two teams from each group will not only advance to the quarter finals but will also book their ticket to the 2025 Rugby League World Cup to be staged in France.

The local contingent of players will depart Jamaica on October 1 ahead of a warm-up match against Cumbria on October 7 at Workington.