York stars Elisa Akpa and Leila Bessahli are among five players with experience in England's Women's Super League named in French squad for the World Cup.

Akpa and Bessahli are expected to play in the WSL grand final against Leeds on September 18 at St Helens after joining York, along with Catalans team-mates Margot Canal and Anais Fourcroy, following a joint training camp between the two clubs.

Former New Zealand Warriors centre Lauréane Biville has been playing for Wigan and scored her side's only try in their 12-4 semi-final loss to York. 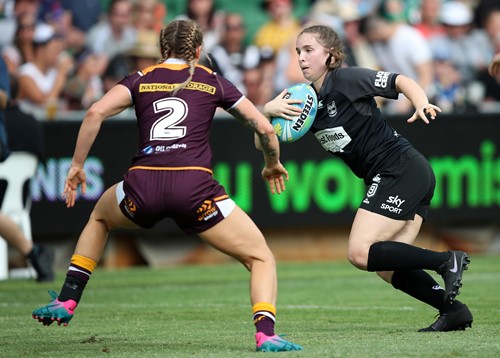 Photo: Biville in action at the NRL Nines (NRL Photos)

France coach Vincent Baloup hopes the experience the players have received playing in the WSL will benefit the national team at the World Cup in England.

Baloup named a 24-strong squad - to be captained by halfback Alice Varela, with Akpa as her deputy - ahead of a training camp in Bordeaux on September 28.

The squad includes 11 players from Catalans and nine from premiers Lescure. All members of the team which lost 36-10 to England in June have retained their places.

The French squad will prepare for the World Cup with warm-up matches against Pôle Espoirs de Carcassonne on September 30 and Brazil on October 27.

Based in York for all three pool matches, France have a tough draw and will meet New Zealand on November 2, Australia on November 6 and Cook Islands on November 10. 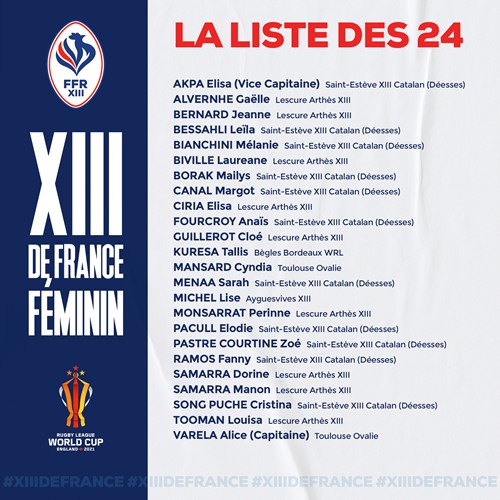 "With this list which serves as a call for the next training camp in Bordeaux from September 28 to October 1, we are completing our selection process for York 2022," Baloup said.

"This group will participate in the World Cup and I would like personally and on behalf of the staff to congratulate these 24 girls.

"They will not only have the responsibility of wearing our colours against the greatest women's nations in our sport, but they will have to redouble their efforts for more than two months, in their commitment and their attitudes, by devoting themselves even more to their preparation.

"The presentation of this group does not eclipse all the players who have participated in our agenda for 18 months and who are not retained. They will be our first supporters in York and those who wear the tricolor scapular will be responsible for representing them and honouring them.

"I have no doubt that the entire federal movement will be able to push and support our players before and during this World Cup." 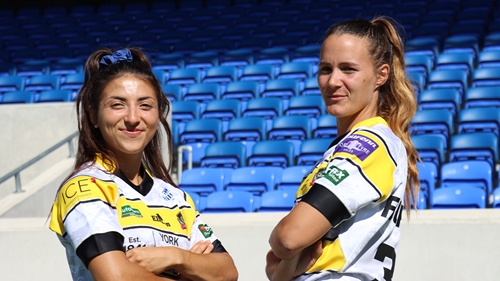