'This could be my last World Cup': Taumalolo pleads to serve ban in NRL

Jason Taumalolo has pleaded to be allowed to serve his suspension incurred with the North Queensland Cowboys in next season's NRL so that he doesn't miss any matches for Mate Ma'a Tonga at the upcoming World Cup.

Taumalo faces a three-match ban after the Cowboys side exited the NRL finals with a 24-20 loss to Parramatta on Friday nigh and he believes the ban should apply to the competition in which it was incurred so Tonga aren't impacted by his suspension.

The 29-year-old was sin-binned for the 15th minute tackle on Parramatta Eels and New Zealand Kiwis second-rower Isaiah Papali'i and later charged by the NRL match review committee with grade two dangerous contact.

He faces a ban of three matches with an early guilty plea or four matches if he unsuccessfully challenges the charge at the NRL judiciary.

The inspirational Tonga forward leader released a statement via his management calling for rugby league to adopt a similar disciplinary system as football in which suspension is served in the competition it was incurred.

“I have truly missed playing for Tonga and I am concerned that this suspension will interrupt my World Cup campaign,” Taumalolo said in the statement.

“This could be my last World Cup for Tonga and I don’t want to let my teammates nor our fans down. I don’t believe I should miss out on Test matches for Tonga because of something I did playing for the Cowboys.

“I like how the [English] Premier League soccer works, where you are penalised for any indiscretion in that competition, not across other competitions." 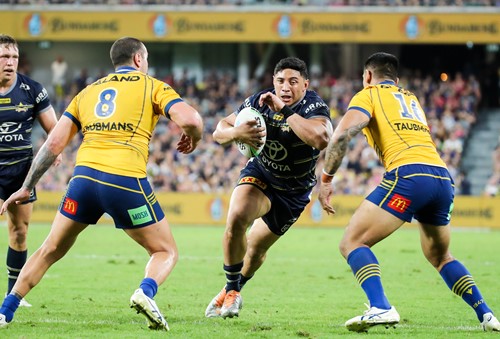 Photo: Taumalolo has been charged over a tackle against Parramatta (NRL Photos)

With Tonga due to meet France in a warm-up match at The New Shay Stadium in Halifax on October 8, it is expected that Taumalolo will miss the Pacific powerhouse's opening two World Cup matches against Papua New Guinea and Wales.

The driving force behind Tonga's dramatic rise at the 2017 World Cup, Taumalolo would then be free to make his first appearance of the tournament against Cook Islands on October 30 at Middlesbrough's Riverside Stadium.

After stunning New Zealand on their way to qualifying for the semi-finals at RLWC2017, Tonga have since beaten Australia and Great Britain to climb to No.2 spot in the IRL World Rankings.

Kristian Woolf's side has been boosted by the inclusion of Gold Coast Titans second-rower David Fifita, along with inaugural Dolphins recruit Felise Kaufusi, who played for the Kangaroos at the 2017 World Cup.

Meanwhile, Fiji Bati star Taane Milne is set to miss the World Cup after being sent off and charged with a grade two reckless high tackle in South Sydney's 32-12 preliminary final loss to Penrith on Saturday.

Milne is facing a suspension of six-to-seven matches.