Lachlan Lam revived memories of his famous father, Adrian, as he led Papua New Guinea to an epic 24-14 defeat of Fiji and helped send Kumuls captain David Mead out a winner in the Pacific Test at Campbelltown Sports Stadium on Saturday night.

Lam scored two tries and laid on another for Mead in a stunning performance to just shade teenage Bati fullback Sunia Turuva, who plays for the Penrith Panthers, as player of the match.

It was just Lam's third Test for the Kumuls but his combination with star centre Justin Olam was so uncanny it looked like they had been playing together for years.

At 24-years-of-age, Lam has made just 31 NRL appearances for Sydney Roosters but he appears destined for a long Test career with PNG, as his father Adrian, who earned the nickname the "Kumul Kid", did during the 1990s.

Fiji captain Kevin Naiqama opened the scoring in the 14th minute after kicking ahead and regathering following an awkward bounce for Kumuls second-rower Dan Russell.

Lam started and finished movement that led to PNG’s first try in the 24th minute after linking with Nixon Putt, who unleashed Justin Olam on a barn storming run down the left flank before passing inside for the Sydney Roosters playmaker.

McKenzie Yei, who plays for the PNG Hunters, put the Kumuls ahead 12-6 when he scored just two minutes before halftime after picking up a loose dummy half pass from Liam Horne and charging through four defenders to score.

Turuva was rewarded for a five-star performance when he pounced on a grubber from South Sydney centre Taane Milne, who was playing in the forwards, to score in the 55th minute but halfback Nautu'a Masima missed the conversion. 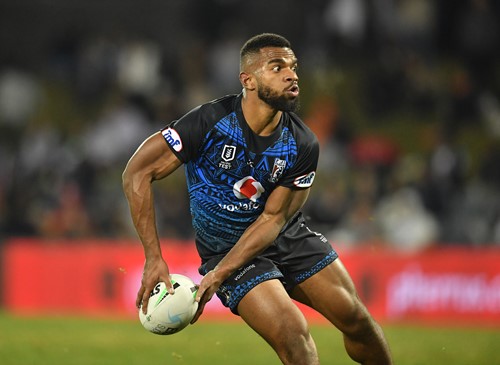 The 19-year-old Turuva announced himself as a star of the future by scored two tries and ran 230 metres with the ball to almost certainly book himself a World Cup berth.

Mead all but ensured that his 14 Test career ended as a winner after backing up a long range break by Lachlan Lam to score in the 66th minute.

Lam sealed the win five minutes before fulltime with his second try after racing through to score from an Olam cross-field grubber but the Bati didn’t give up and Turuva scored on the last play of the game after winning the race for a Kikau grubber.