The Kangaroos have returned to top spot in the men’s IRL World Rankings for the first time in three years while Toa Samoa have climbed from seventh place to third – the highest position ever held by the Pacific nation - after reaching the final of the World Cup in England.

Samoa went down 30-10 to Australia before a crowd of 67,502 at Old Trafford on November 19 but their achievement of becoming the first tier two nation to qualify for a World Cup final sparked celebrations around the globe and shook up the men’s rankings at the end of 2022.

There is also a new No.1 nation in the wheelchair rankings, with England leapfrogging France after their World Cup triumph, while the Jillaroos retain first place in the Women’s rankings after winning a third consecutive final. 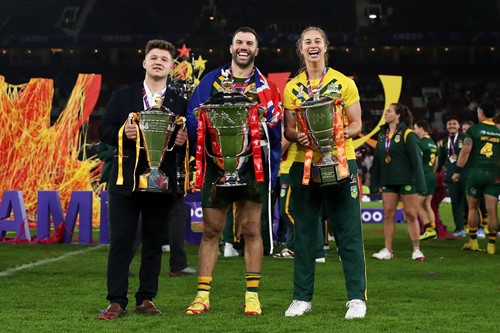 Cook Islands were the most significant improvers in the women’s rankings, climbing from 11th to sixth place, while Brazil were the biggest movers – jumping seven spots from 17th to 10th after their World Cup debut.

Despite not playing in the World Cup, Ireland have moved from 14th place to eighth and Greece has climbed to 18th to 11th spot.

There was no change to the top four women’s teams - Australia, New Zealand, England and Papua New Guinea.

The Wheelaroos have climbed from seventh place to third behind England and France in the wheelchair rankings after reaching the semi-finals of the World Cup.

IRL chair Troy Grant said: “On behalf of the IRL I would like to congratulate the Australian men’s and women’s teams and the England wheelchair team.

“All three teams proved they are the best in their discipline with unbeaten records at the recently completed World Cup in England, culminating in victory in their finals at Old Trafford and Manchester Central.

“In the case of England, they also overcame France - the previous No.1 ranked wheelchair team - in a mid-season Test before again triumphing against the defending world champions in the World Cup final.

“For the Kangaroos and Jillaroos, the World Cup marked a welcome return to the international arena after a hiatus since 2019 due to COVID restrictions and fans look forward to seeing the world champions in action in 2023.

“Congratulations to the other teams who have risen up the IRL World Rankings, including Samoa, whose run to the men’s World Cup final sparked remarkable scenes around the world.”

The IRL World Rankings are determined by the following criteria:

The rankings reward teams who are active and win games.

Australia entered the tournament in fourth spot behind New Zealand, Tonga and England after losing two of their four Tests since the 2017 World Cup but have regained first place following their unbeaten run at RLWC2021.

Kangaroos coach Mal Meninga said: "This is great news. I feel that we thoroughly deserve to get our No.1 ranking back considering the increased challenges now with the rise of the Pacific nations". 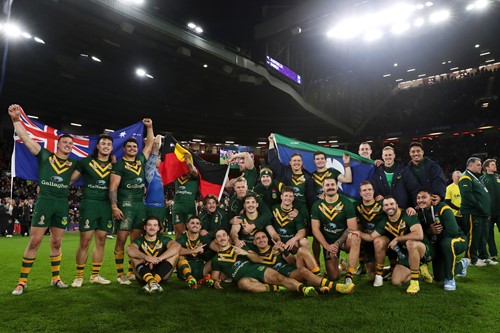 The Kangaroos are back in No.1 spot (Getty Images)

Tonga have dropped from second spot to fifth after being eliminated at the quarter-final stage of the World Cup by Samoa, while Lebanon have moved from 13th place to eighth after reaching the quarter-finals.

Wales are in 10th place, up from 16th, while Cook Islands have risen from 20th spot to 12th - one position ahead of Jamaica, who were previously 21st.

Brazil are the biggest movers, up to 22nd spot from 40th, after winning the South Americas Championship in November to earn a place in the Americas qualifying tournament for the 2025 World Cup. 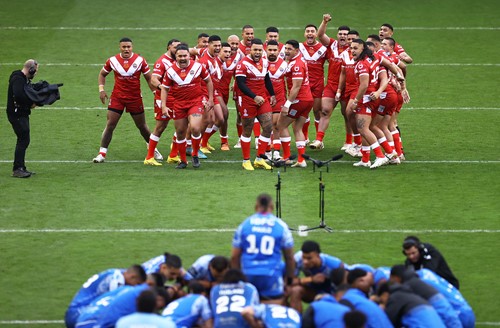 Samoa have moved to third, while Tonga have dropped to fifth (Getty Images)

Chile, who were runners-up to Brazil in Colombia, have also risen significantly from 32nd spot to 23rd.

MEA Championship winners Nigeria (24th place) and runners-up Ghana (26th) have also climbed up the rankings, along with Cameroon (31st) and Kenya (32nd).

Germany have moved up from 25th place to 21st after regaining the Griffin Cup with a 29-24 defeat of Netherlands. 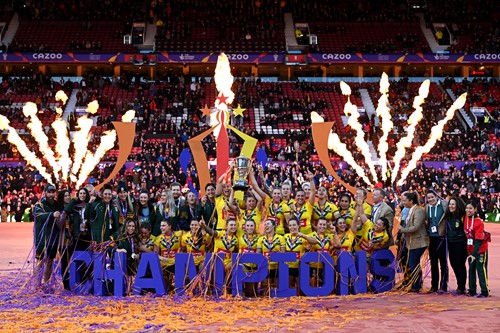 The Jillaroos extended their unbeaten run since 2016 to 13 Tests as they clinched a third consecutive World Cup final victory with an emphatic 54-4 defeat of arch rivals New Zealand at Old Trafford.

Jillaroos coach Brad Donald said: "We are ecstatic to still be in No.1.

"Back in 2016 the group came together and those players were the ones who said they wanted the team to be the best in the world; to put the focus on women's rugby league and help grow a domestic competition in Australia, which we did in 2018.

"As we see the emergence of the NRLW, the great depth of players and the participation rates from under 6s to open age women it is a credit to all involved in growing the game."

The Kiwi Ferns remain second, ahead of World Cup semi-finalists England and Papua New Guinea, and France - the same order as those nations entered the tournament. 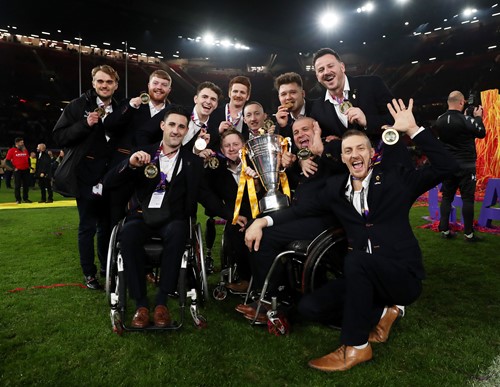 England have leapfrogged France in the Wheelchair rankings (Getty Images)

England ended France's World Cup domination since 2013 with a gripping 28-24 win in the final at Manchester Central before a world record crowd of 4,526, which was watched by more than 1 million viewers on the BBC.

As a result of their success this year, which includes a 62-48 triumph against France in June, England have usurped their long time rivals for the No.1 spot on the IRL World Rankings.

England coach Tom Coyd said: “This is a great way to finish an amazing year. We had the target of beating France in our home World Cup pretty much since the last World Cup in 2017.

"But we always recognised it would be a massive challenge to overtake them as the world number one – and the quality and intensity of the Final in Manchester underlined that.

"I’m delighted for all the guys who worked so hard for so long – and it’s also great to see the effect of the World Cup in the expansion of the world rankings, as Wheelchair Rugby League goes to another level.”

Australia are third after competitive performances against England in the opening match of the World Cup and France in the semi-final, followed by Wales, Ireland, Scotland and Spain.

United States, who made their international wheelchair debut at the World Cup, are eighth and showed great potential.

England Wheelchair Rugby League GM Martin Coyd, OBE, said: "After an incredible Rugby League World Cup where we were able to showcase our game to the whole sporting world, we are thrilled to be ranked as world No.1.

"The national teams are getting stronger, particularly the Australians, and the emergence of the USA is very exciting.
"Being world champions and world No.1 is a special time, and we ill enjoy it whilst striving to get better for 2025".
Share this
PARTNERS