The Princess was introduced to the England players, support staff and other invited guests by RFL Chair Simon Johnson and England Head Coach Tom Coyd.

James Simpson, who announced his retirement last week after an outstanding career with Leeds Rhinos and England, was among the players in attendance.

A delight to celebrate with @England_RL’s Wheelchair Rugby League World Champions and their families today.

This history-making, record-breaking team are champions on and off the pitch. Well played! pic.twitter.com/XczNkGK9A3

— The Prince and Princess of Wales (@KensingtonRoyal) January 19, 2023

Her Royal Highness also joined the squad for a group photograph with the World Cup trophy.

“It was amazing to meet her and speak to her, and especially to hear that she’d watched the World Cup Final with her children and they’d all enjoyed watching us win,” said Tom Halliwell, the England captain.

“We’ve had so many incredible experiences since winning the World Cup, and it doesn’t come much better than this,” added Adam Rigby, a stalwart of the England squad who now plays for Wigan Warriors.

“The best thing about the World Cup was the way it raised the profile of Wheelchair Rugby League to a new level, and this was another example,” said Seb Bechara, England’s Perpignan-based Golden Boot winner.

✅ Royal seal of approval from @KensingtonRoyal...

Bechara endured a complicated journey as a result of the industrial action in France, travelling via Barcelona and coming to Hampton Court straight from Heathrow.

The Princess was appointed Patron of the RFL in February 2022, and attended the World Cup double header at Wigan’s DW Stadium last November, when England’s women beat Canada and the men’s team enjoyed a quarter final victory over Papua New Guinea. 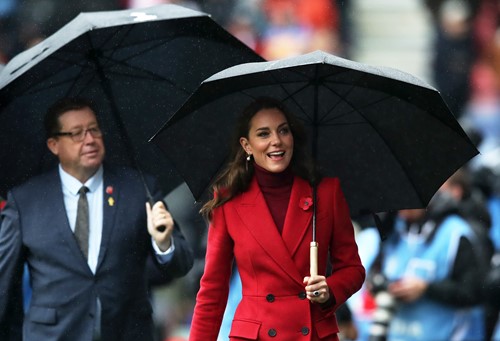 Members of all three England teams who competed in the World Cup were invited to the Royal Carol Service at Westminster Abbey last month.

A letter congratulating the Wheelchair team for their World Cup triumph now takes pride of place in the foyer of Rugby League’s new headquarters on the Etihad Campus in Manchester. 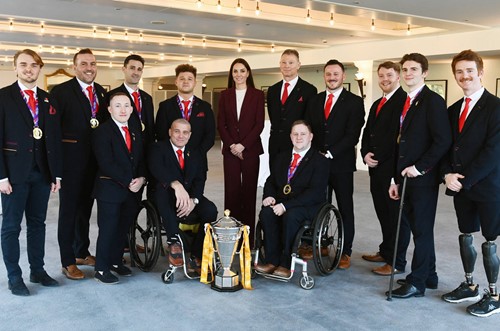 "I wanted to send my huge congratulations to you all on your incredible success at the recent Rugby League World Cup.

"Your dedication to your sport, and commitment to your team-mates and fans, shone through at every stage of the tournament.

"It was an absolute delight to follow your progress and I am so thrilled that you have become champions.

"I have no doubt that your efforts and achievements in the lead up to and during the World Cup will have created an incredible legacy which will be felt within the sport for years to come.

"I hope you are now able to take a break and enjoy spending time with your friends and family over the coming weeks. Many congratulations again."