Brazil has confirmed its place at the 2023 Americas Cup – one step closer to Rugby League World Cup qualification – with an emphatic 56-0 victory over Colombia.

The final game of the South American Championship in the picturesque Andean town of Jericó saw Brazil needing to win to inch out rivals Chile for the title.

The Carcarás showed they meant business from the second minute when fullback Ravi Araujo scored, and rarely took their foot off the pedal as they led 34-0 at halftime.

Prop and captain Caio Ozzioli, who has been pioneering rugby league in Brazil since 2014, scored a rare hat-trick, but did not get carried away with the win. 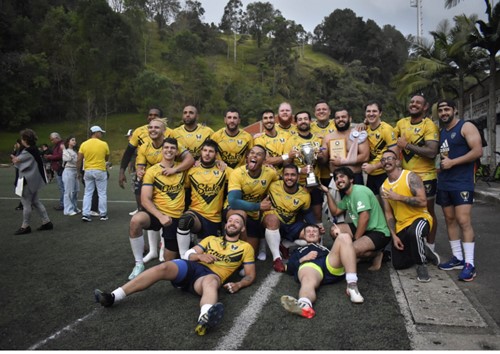 “We have a lot of work to do before we face the likes of Jamaica, the USA and Canada,” Ozzioli said.

“We know that. There’s much improvement left in us.

“I believe our strength in this Championship was that we played as a team; we were united in one dream.

“There’s nothing in this world quite like being a Brazilian.

“We can now say we are two-time champions of South America.”

Ozzioli’s closing comment was in reference to becoming the first nation to win the South American Championships twice, taking out the previous title in 2018 when continental heavyweight Chile was absent.

Chile’s camp has been morose since unexpectedly losing to Brazil by a two-point margin on Friday, but the Weichafes have the personnel to bounce back strongly in years to come. 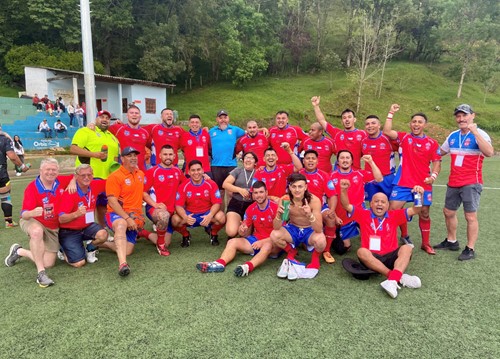 Chile players after their defeat of Columbia (Photo: Jonatan Torres)

Indeed, both nations should be applauded for creating one of the best new rivalries in international rugby league.

Competition in the South American continent promises to become even more intense in years to come, with Argentina soon expected to return as an official IRL member. Eyes are also being cast to neighbours such as Uruguay, Peru and Venezuela.

“The most pleasing aspect of the 2022 South American Championships was that we saw crowd numbers grow each day,” Tournament Director Robert Burgin said.

“The level of football being played has also increased four-fold in the past four years, and that goes for all nations.

“Colombia may have been defeated heavily on the scoreboard today, but they are a real heartland for the sport, with people who truly care about the game.

“I entered their sheds after both games in this tournament and there were people crying on both occasions. These are young men who want to do better, and I have no doubt, will be better.

“In my opinion, this was the best South American Championships of the four that have been held, and so much of that is due to Juan David Espinal and the town of Jericó giving everybody unforgettable experiences.”

Prior to the event starting, the town gave all three teams a street parade that lasted 30 minutes, led by a 40-strong person marching band, and ending with more than 1000 people gathered in the town square.

In the shadows of the most diverse Rugby League World Cup ever being held in England a week before, it was another positive sign to start the journey to France in 2025.

Player of the tournament was bestowed upon Brazilian second-rower Leandro ‘The Horse’ Caetano, who posted three tries against Colombia, after also being amongst Brazil’s best in the tense 20-18 win against Chile.

Fullback Araujo collected 20 points from 8 goals and a try to finish the tournament as the leading points-scorer (22 points), just clear of Chilean maestro James Horvat (20 points).

The 56-0 win is Brazil’s biggest against an IRL-affiliated nation, only just short of their 60-0 win against unranked Uruguay.