Canberra Raiders star Hudson Young has thrown his support behind a fundraising campaign to help war-ravaged Ukraine send a team to the upcoming under 19s European Championships.

Young, who is the only NRL player with Ukraine heritage, has spoken about his concern for family members affected by the Russian invasion and the growth of the game in the European nation.

His grandmother, Valentina, moved to Australia with her family after World War II and initially lived in a migrant camp at Greta, a small town near Newcastle where Young was born and raised.

While he has never been to Ukraine, Young is aware of the ambitions of the game’s No.26 ranked nation, according to the latest IRL World rankings.

Ukraine hope to qualify for a berth at RLWC2025 in France and if successful many of the players are likely to be drawn from the under 19s team playing in Lignano Sabbiadoro, Italy.

As Ukraine continues to struggle with the impact of the Russian invasion, a fundraising campaign has been launched to assist with the cost of travel and equipment for the team to the tournament, which commences on September 1.

Young believes the U19s European Championships tournament will also provide a glimmer of hope for young Ukraine players, many of whom have been forced to defend their nation.

“For Ukraine to be able to play in that tournament would be a massive boost for them, considering what is going on over there,” Young said.

“Giving kids the opportunity to play rugby league and having something to strive for, like the chance to play in a Word Cup, is going to drive them to keep going.”

Young’s grandmother, who regularly attends his matches with the Raiders, has been in contact with family in Ukraine. 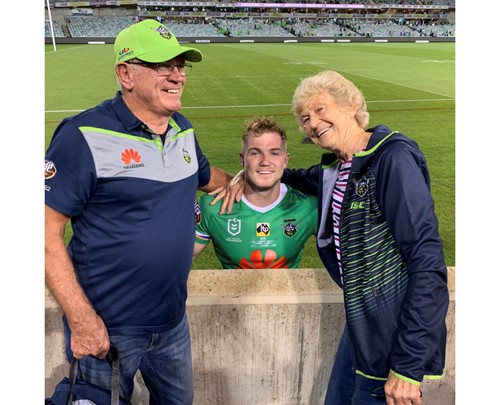 “Nan has still got family in Ukraine so for her, and Nan’s sister as well, it is tough knowing that there is a war going on over there and they are in danger,” Young told NRL.com.

“Nan’s sister has spoken with people over there and I think they are safe. They are on the outskirts [of where the fighting is happening] but they said they could hear the war going on.

“It is a terrible time over there for them, but fingers crossed everything settles down in the future.”

European Rugby League’s official kit partner, Canterbury, and retail partner, Hardgear Ltd, have combined to supply Ukraine’s playing kit for the U19s European Championships but further funds are required to send the the team to the tournament.

We are proud to support the efforts of the Ukrainian Federation of Rugby League at this very difficult time, and are delighted they’ll be wearing our kit. We wish the team all the best for the Championships 🙌 https://t.co/JxwctuHO5I