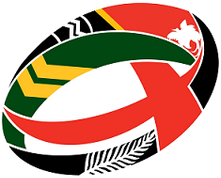 The Four Nations replaced the Tri-Nations tournament that was contested between Australia, New Zealand and Great Britain.